On the face of it, this looks like a no-brainer, but the Focus sticks around

Can a hot hatch offer the same thrills as the iconic muscle car on a blast across Wales?

For a moment, I confess, I did wonder what the bloody hell I was doing on that road, trying to follow a 5.0-litre V8 coupé in a hatchback with half the number of cylinders and less than half the engine capacity. And then I remembered: it was interesting, that’s all. Clearly my little long-term Ford Focus ST was not going to keep up with a mighty Mustang Bullitt, and nor should it be expected to, given that its svelte sister costs over half as much again and has more than 60% more power. But it was interesting nonetheless.

Interesting because Ford, the company that brought motoring to the masses more than a century ago, is also the company whose record in producing fast and fun but affordable cars down the decades is second to none. In the Mustang’s case, as the original pony car back in 1964, it started a beloved sub-genre that still exists to this day and in which it remains the benchmark performer. As for the Focus, it too can be traced right back to the early days of its category – if not to the very start, then certainly a full 40 years to the birth of the Escort XR3.

Ford has long produced two entirely different and diverse ways of entertaining its drivers, so today the question is this: just how close can a quite well-resolved hatch get to matching the thrills of a purposebuilt sports coupé? Or is the Mustang in such an entirely different league, and the performance void between them so large, it actually makes the sleek coupé look cheap?

On paper, it’s not looking good for the Focus. Sad to say it though I am, the Mustang is the only classically configured car of its kind left on sale in the UK: a front-mounted engine, namely a normally aspirated V8, driving the rear wheels through a manual gearbox, just like the original ’Stang 56 years ago. The Focus does actually have a Mustang engine in it, but it’s the relatively puny 2.3-litre four that dare not speak its name in traditionalist circles where the bent-eight purists and ‘no replacement for displacement’ mob still doggedly defend their small and dwindling enclave. And while, yes, the Focus too has a manual gearbox (thank goodness), by directing its power forward and not rearward it is therefore incorrect wheel drive. Drive this engine in a Mustang and you spend all your time wishing it were a V8; drive it in a Focus and does it not follow you’ll therefore spend all your time wishing it were a Mustang? 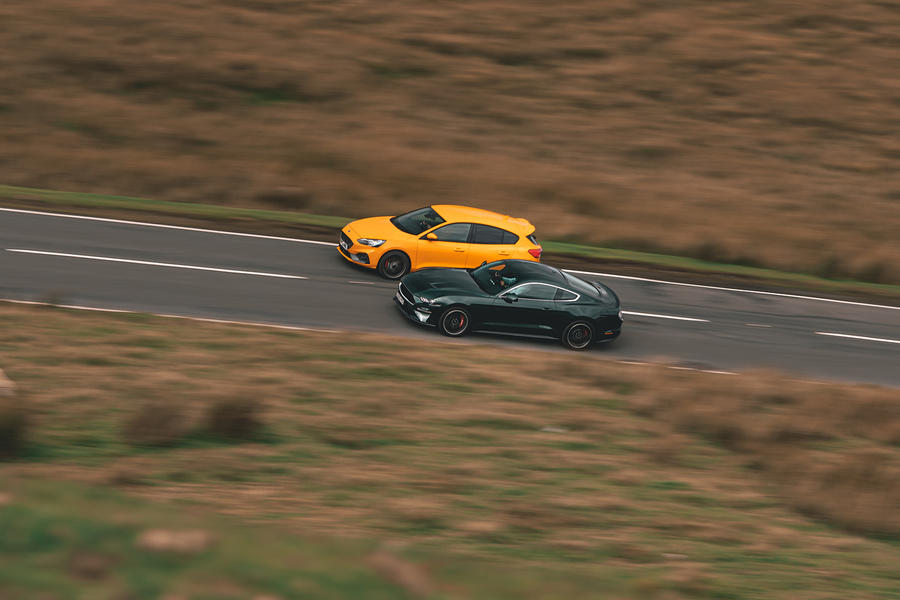 A somewhat perverse logic, perhaps, but plausible, at least superficially. Its case is bolstered more than a little by even the smallest exposure to the Bullitt. I’m not going to dwell on the Bullitt-specific upgrades here because they’re not new and this story is more about a battle of two concepts than a twin test of two cars. Suffice to say if you want a Mustang for driving, of those available in the UK, the Bullitt, with its slightly more powerful engine, uprated chassis and bigger brakes, is the one. It looks better, sounds better, goes better, is better than the standard car.

Actually, it surprised me, perhaps because this particular car came equipped with £1600-worth of magnetorheological suspension damping, that the slightly clunky progress the Mustang usually makes as it wriggles around on imperfect road surfaces was notable only for its absence. It rides really well.

Driving it fast is a slightly strange experience because we’ve all forgotten what normally aspirated engines with high specific outputs are like. Not much happens in the first 3500rpm. Indeed, it’s only when you pass peak torque another thousands revs or so around the dial that it really takes off. But then it makes good on the promise of its appearance: this is majestic, thrusting performance, such that you’ll forgive the fact the revs fall too slowly between shifts so you have to time your instructions to the heavy, mechanical gearbox with care.

Make no mistake, although in the US Ford will sell you a supercharged Mustang GT500 with 750bhp, the Bullitt is still a proper Detroit muscle car, with the punch beneath the bonnet to deliver on the promise of those looks. It’s got a surprising amount of grip, too. As you sit there amid the thunder, guiding this authentic slice of automotive Americana across wide, open moorland, the last car in the world you’d expect to give it any kind of challenge is the upstart orange hatchback still snapping insolently at its fat rear pipes.

So you swap positions and cars. It’s now your turn to drive the Focus with the Mustang giving chase. Oh dear. Where you sit low and reclined in the Mustang, surveying a bespoke instrument display that can dazzle you with the technical information it can yield, the Focus offers a cabin that’s pretty dowdy even by normal hatchback standards, never mind those costing over £30k and let alone that of its legendary £50k super-coupé in-house rival. It feels insubstantial by comparison (because it is), and you feel perched upon it rather than slung low, deep within the cabin. The engine starts with a flat four-cylinder blare – rarely has the woofle of a quad-cam V8 been more missed. 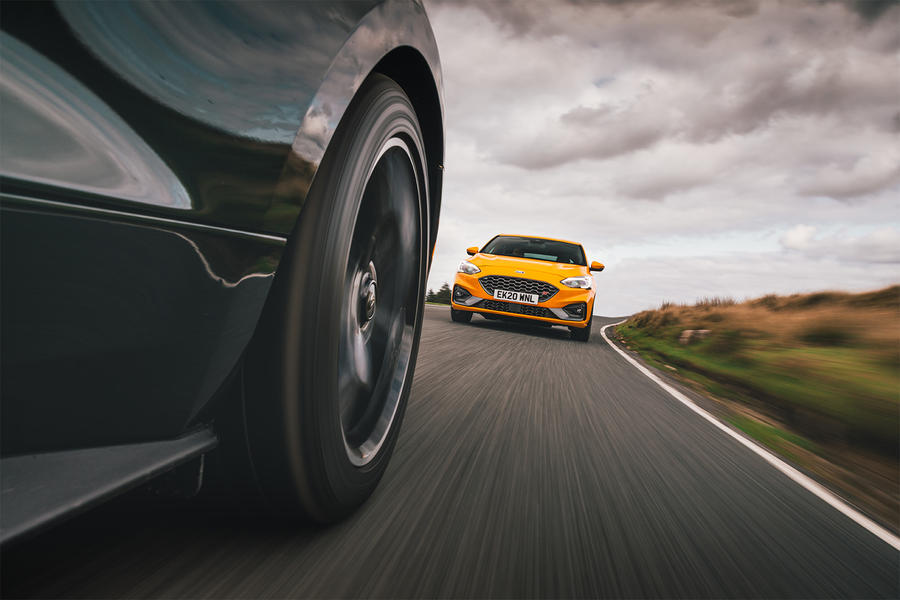 Grab a gear and go. Almost at once you start feeling better about life. While the ST is less accelerative, the gap isn’t as wide as you might expect, and there are two reasons for this. First, being front-wheel drive, the car’s quoted 5.7sec 0-62mph run is a poor form guide because, for at least half that time and probably more, you’re going to be traction limited. With the same traction as the Bullitt, you could knock that back to 5.4sec or so, within half a second of its stablemate.

Why so close when there’s such a disparity in power outputs? Weight and torque. The ST is a stunning 350kg lighter than the Mustang, which means its torque-to-weight ratio – the never-quoted number that is nevertheless the best indicator of actual accelerative potential – is 211lb ft per tonne, which is not so very different from the Bullitt’s 231lb ft per tonne. And while the Focus provides it all at 3000rpm – smack in the middle of its rev range – the Mustang requires more than 50% more revs before giving all it’s got.

The ramifications are far greater even than that. The Bullitt is a fabulously atmospheric car and dynamically quite composed if you keep your driving style as cool and chilled as the image you hope it will project of you. But push it further and even with its trick dampers, it soon starts to struggle. The nose feels a little vague and you find yourself making frequent tiny corrections, not because it’s sliding about but simply because it’s not quite going where you aim it. Beyond a certain point, the harder you go, the more conscious of its limitations you become.

The ST is precisely the reverse. Between the goalposts of what is safe on a public road, it never stops getting better. The engine is actually superbly well suited to this car. It emits a growl at high revs that may make you wonder whether there aren’t actually five rather than four cylinders beneath that bonnet. The thicker torque curve and closer gear ratios mean you’re never marooned below the powerband, while its adjustability, poise and accuracy are in a different class altogether to that offered by its bigger brother from across the pond.

And here’s the thing: I’d rather rumble to and from that road in the Mustang. For a certain sort of enthusiastic but not terribly demanding driver, it’s absolutely brilliant. But once there, I’d take the Focus every time. Despite its paucity of power and cylinders, its humble origins and the fact it pulls rather than pushes you from place to place, it’s just a better car to drive. More taut, more responsive, more fun. Straight-line jockeys will always find the lure of the V8 irresistible and I get that entirely, but I am and have always been more interested in how a car handles because that’s where you, the driver, get involved.

So yes, of course these two performance Fords are built for different people and different reasons, so this is one rare occasion where a horses for courses verdict might be permissible. But I’m not going to. I really liked both cars but, as a pure driving machine, the little front-drive hatchback outpoints the big rear-drive muscle car. It’s not a knockout blow, but a decisive and worthy victory nonetheless. 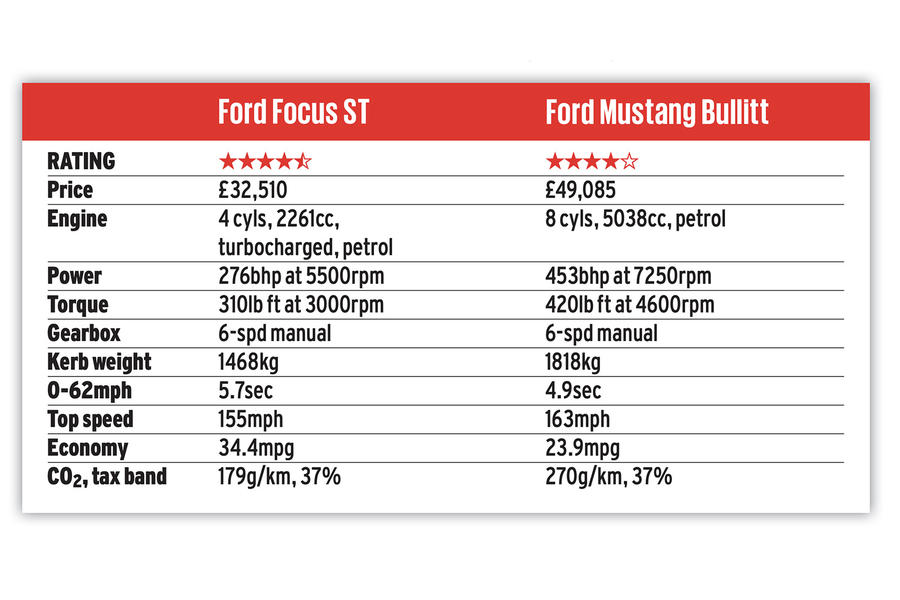 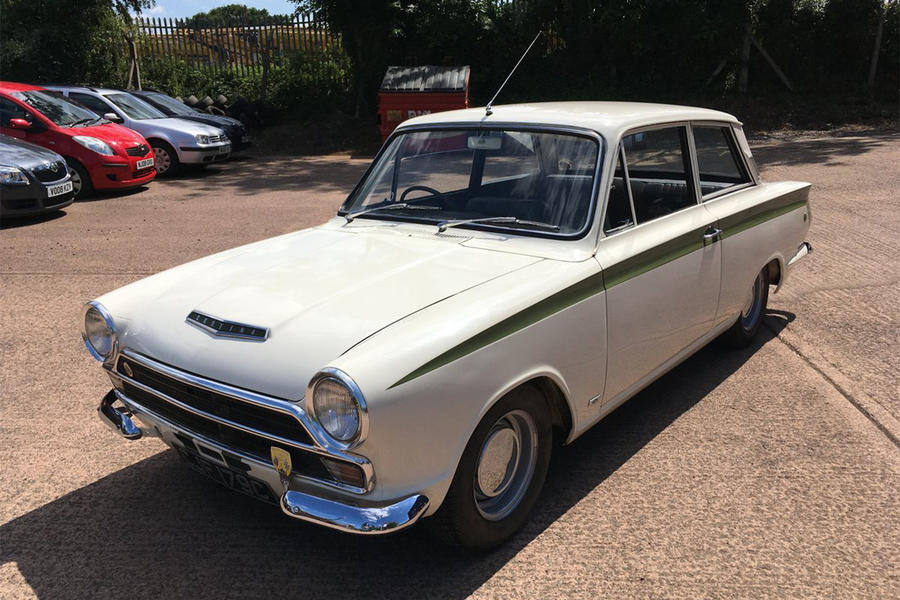 1965 Lotus Cortina Mk1, £58,950: Unleash your inner Jim Clark with this stunning example of the original super-saloon. Fresh from a sympathetic restoration and with just four owners on the books, it wears its 55 years extremely well. 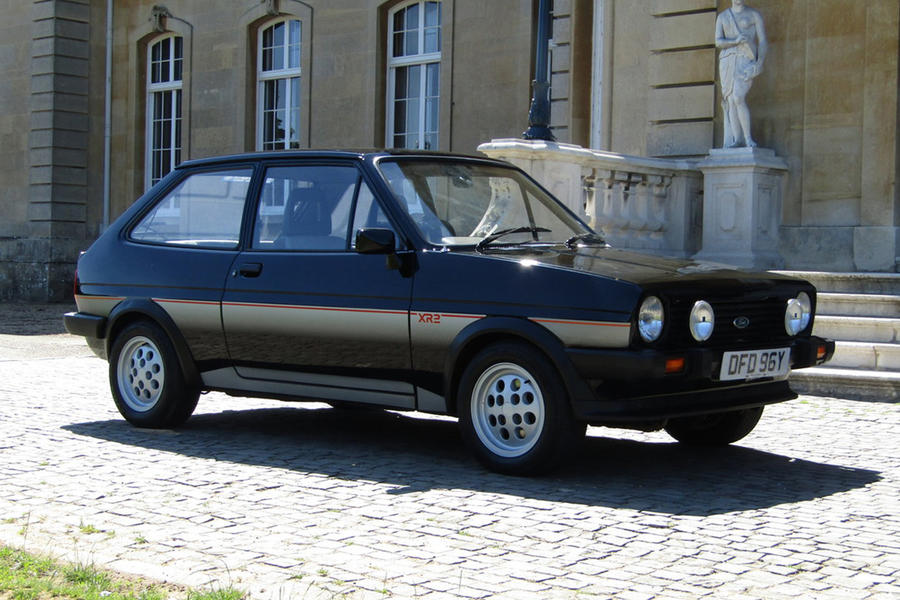 1983 Ford Fiesta XR2, £14,990: Everyone wanted an XR2 in the 1980s and, judging by today’s prices, the yearning remains. A bit more gets you a current-gen ST-3, but Spandau Ballet won’t sound half as good through the speakers. 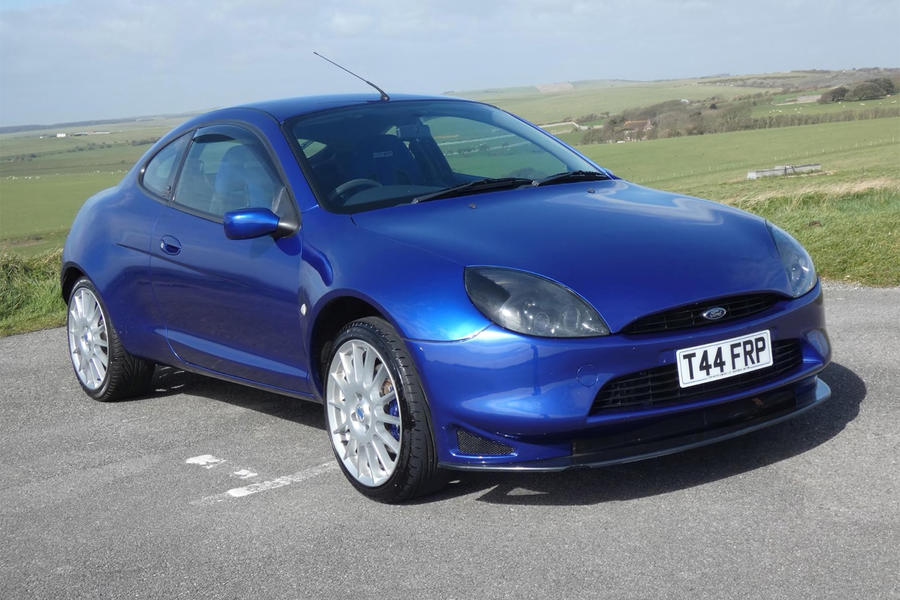 2000 Ford Racing Puma, £12,995: Not a fan of the new Puma ST? Grab a clean example of the first fast Puma before they’re all gone. This is number 196 of just 500 and it wants for nothing save some minor paint repairs at the rear.

A used Mustang for Focus money

You can buy a current-generation Mustang for not much more than £20k. It is likely to be an early 2016 model and may well have an automatic gearbox or the 2.3-litre four-cylinder engine (which is actually a pretty decent motor). That said, the premium for V8s is not as much as you might think, offset as it is by significantly greater running costs.

Give yourself the same money as you’d spend on the Focus and there’s a wide choice of cracking used ’Stangs. Expect a selection of two-year-old cars with the V8, a manual gearbox and four-digit mileages. Just remember, however, that 2018 was also the year the car was facelifted, giving it a more purposeful look as well as a decent power hike to 444bhp. Post-facelift cars will either be a bit more pricey or have done a few more miles, but they’re definitely worth the extra.