Ice to meet you: Introducing the coldest large-scale indoor test track in the world

Ice to meet you: Introducing the coldest large-scale indoor test track in the world

At Test World in Finland, cars can undergo winter testing all year round

Every November, car industry engineers dig out their thermals and puffer jackets before jumping on a flight to the Arctic Circle for the annual cold-weather-testing pilgrimage.

Autocar readers will know all about this snowy exodus as disguised prototypes get papped as they venture into the open for cold starts, acceleration tests, stability control calibration, anti-lock brake assessment and handling appraisals.

Some engineers, however, have a head start and have been cold-weather testing through the summer months courtesy of an indoor test track where there’s snow and ice despite the outside temperature hitting 30deg C as the sun beats down.

Just one global location offers large-scale indoor cold-weather test tracks – Test World in Ivalo, northern Finland, 180 miles inside the Arctic Circle – and we’ve been invited inside to sample the facility. 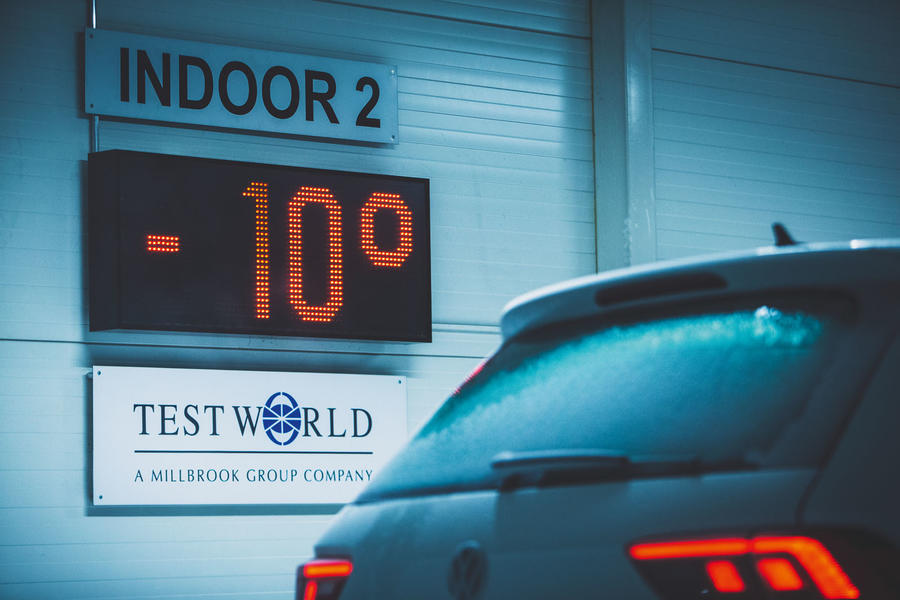 “We have test work going on all through the summer – snow tyres, handling, stability control, cold starts, you name it,” says Test World’s managing director, Janne Seurujarvi, “and we are prototype safe, so the paparazzi can’t spy the cars when they’re indoors.”

Test World started out with an outdoor proving ground adjacent to Ivalo’s airport in 1991, and then opened a second site a few miles up the road called Mellatracks, where it built its first indoor track in 2012.

There’s a British link, too. Millbrook, the former General Motors proving ground in Bedfordshire, bought Test World in 2015, a year before Millbrook was itself snapped up by Spectris, the Egham-based maker of precision instruments.

“We have controlled and repeatable conditions indoors because we only use natural snow and that’s very important to engineers,” adds Seurujarvi. 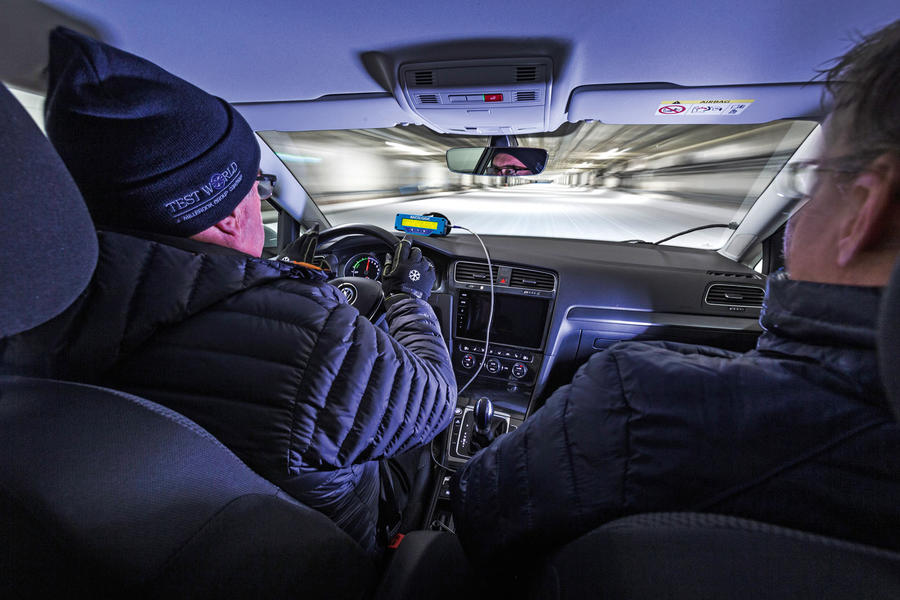 Test World calls its knowledge ‘snowhow’, built around decades of experience in snow and ice tracks, and demonstrated through April to November as it keeps the indoor snow in tip-top condition (see the end of this article).

On site are 70 engineers, but the headcount can swell by more than 250 when cold-weather testing is in full swing. Historically, about 80% of the work is testing tyres, especially to measure against the EU’s R117 standard – the consumer tyre label.

But the mix is moving towards more vehicle testing as OEMs speed up the development of electrified powertrains and shorten development cycles, which demand all-year-round cold-weather testing. The recent rush to certify engines to WLTP standards has increased business, too.

“There’s a new US snowflake label from late this year and we’ve ordered a new test vehicle – a pick-up – for the extra testing we’ll be doing,” says Seurujarvi. “For 2020, there’s also a new EU ice label regulation and that’s more work.”

Responding to demand, Test World opened an indoor handling track in 2015, a new straight-line facility in 2018 and two tarmacked surfaces this spring.

There are even a handful of refrigerated shipping containers dotted around the site capable of ‘cold-soaking’ prototypes in summer as if they’ve been left overnight at -40deg C. 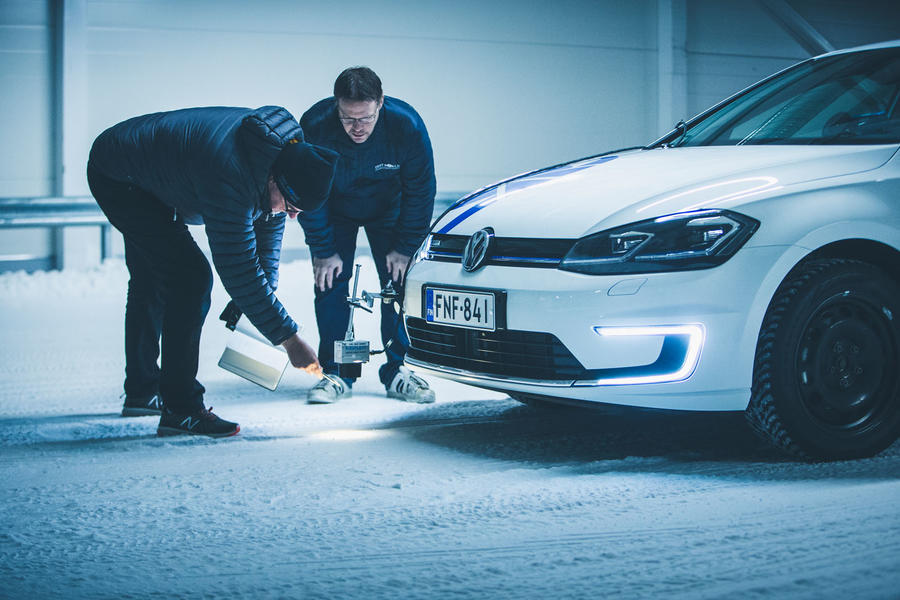 “We had a company here a few years ago with electric car prototypes and they just wouldn’t start after extreme cold sessions like that,” says Seurujarvi. “They were very thankful and went home to fix their problems.”

Today, Test World offers 20km of test tracks at the airport site and 80km at Mellatracks, of which about 1.2km is indoors.

The future includes ambitious expansion plans to add more facilities in the middle of the next decade, including a further two indoor tracks. Seurujarvi has brokered land deals with his neighbours to extend Mellatracks to 1000 hectares – four times its current area.

The highlight will be a huge high-speed indoor track, dubbed Indoor X and the area of eight football pitches. At 60,000 square metres, Indoor X will be three times the size of Indoor 2, a 350-metre-long and nine-metre-wide kidney-shaped oval, where I will have the chance to steer a couple of Test World’s prototypes. 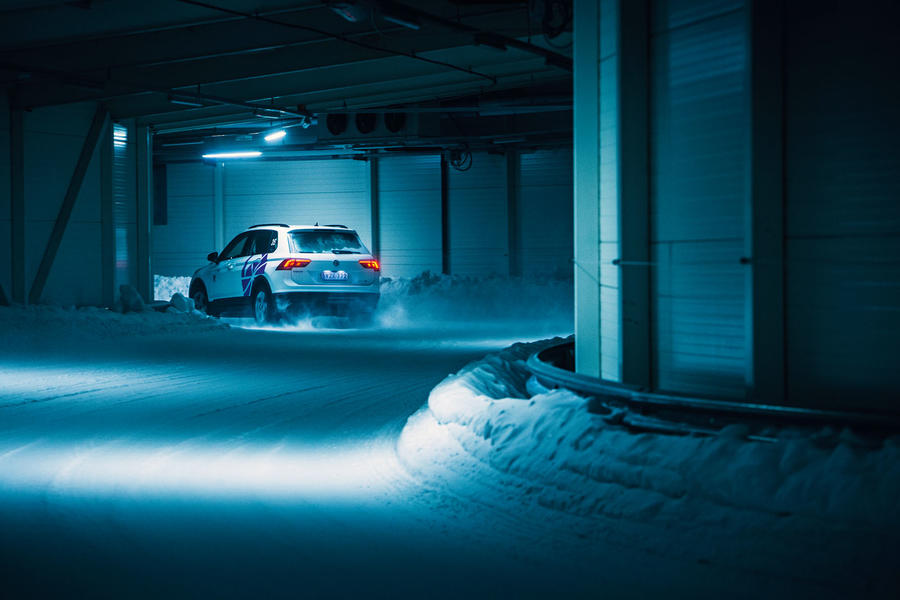 Step into the cold

Outside, the weather is bright and warmish and the roads may be damp, but there’s no snow and ice. Yet behind a corrugated door the temperature drops immediately to -10 deg C, my breath condenses as I zip up my puffer jacket and there’s a quarter-mile of road with a perfect strip of ice down one side and wet on the other, all housed inside a brightly lit, factory-like shed.

These are Indoor 4 and Indoor 5 – two 205-metre-long by eight-metre-wide Tarmac strips whose surface conditions can be set up as ice, dry or wet, or a combination of all three as a cocktail of tricky road conditions. 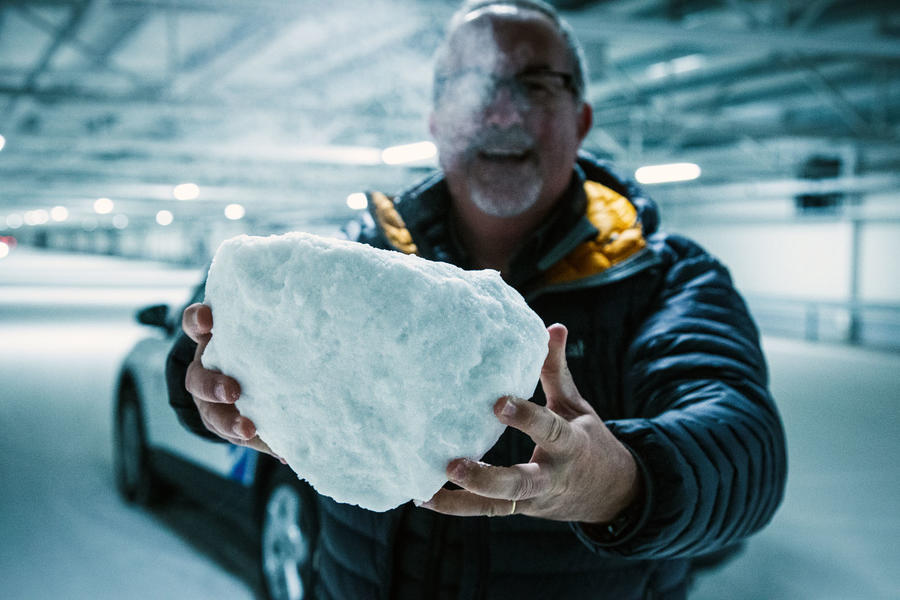 Even in winter, setting this up outside on a test track would be difficult and take time, but indoors the controlled conditions allow testing to proceed all year round.

Tests like this have been ongoing since spring and through the height of summer, in this case helping tyre companies perfect compounds and tread patterns while gathering data for the ‘Three Peaks’ snow tyre classification and the EU tyre label, with its wet grip, noise and efficiency ratings.

Mäki was once mechanic to a 600bhp rallycross racer as a hobby, but his day job now is to methodically put cars and tyres through their paces – and it turns out he’s pretty tasty behind the wheel of Test World’s VW Tiguan soft-roader.

Today, the e-Golf isn’t up for anything fancy, as it’s fitted with an optical sensor to accurately measure speed, used because the more usual GPS speed sensor won’t work inside the steel-clad test building. 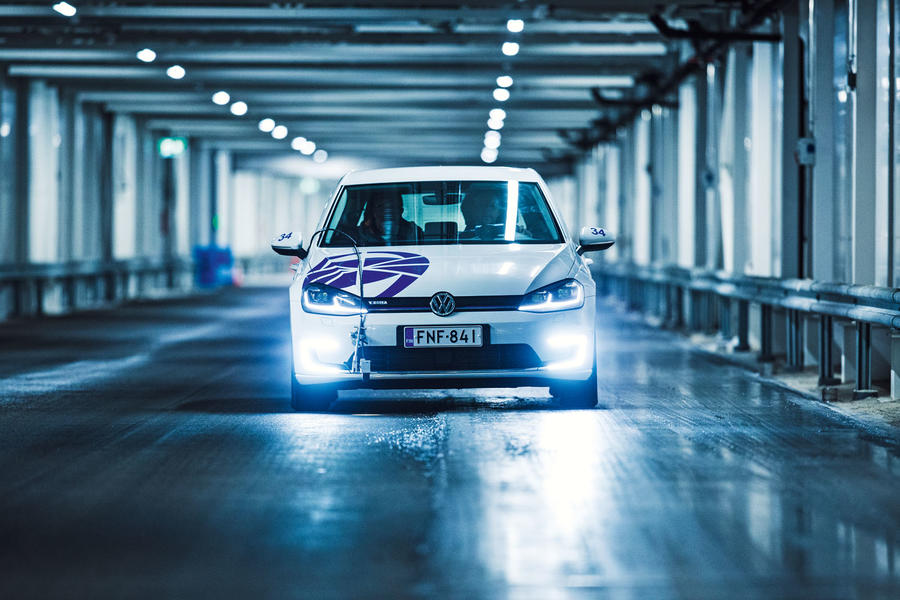 This unremarkable-looking device measures speed by shining a beam on the road, but its high-precision optics translate into a remarkable price of £15k, so Mäki’s career will go into a downward spiral if the e-Golf gets stuffed into a snowbank while Autocar is in attendance.

We move next door to Indoor 1 and Indoor 3 and there’s a significant change in conditions here – the 13-metre-wide track is completely covered in a beautiful, wall-to-wall carpet of fresh white snow.

Despite having been in operation since April, the snow is fluffy and dry and squeaks, like it’s freshly fallen, as the tyres on the Tiguan go onto full lock as we drive around the facility.

Indoor 1 and Indoor 3 can be linked to Indoor 2 to make a one-kilometre circuit of continuous snowy test track. However, we’re concentrating on Indoor 2 since the other tracks are now in use by a British supercar manufacturer calibrating the traction control on a new model. Amusingly, we already know they’re in town because their team of engineers were wearing branded clothing as they tucked into breakfast at our hotel that morning.

The snow in Indoor 2 is also amazingly soft under foot, and crunches under my shoes just like freshly fallen white stuff, which again is remarkable given it has been driven on for months. We watch as a pick-up truck fettles the surface withan 800kg trailer, running on four tyres each fitted with 10mm-long ice-racing spikes. 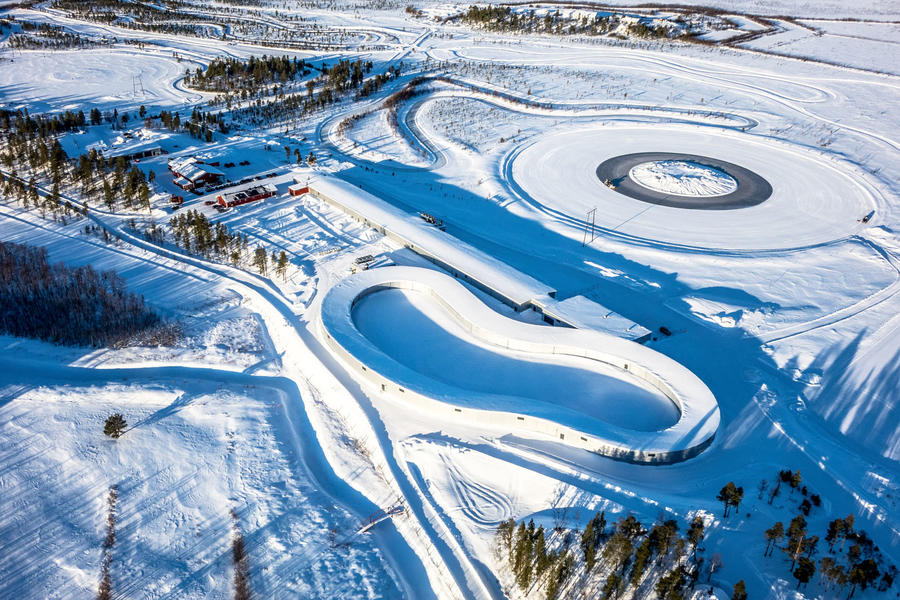 Around the edges are banks of crusty, icier snow, which Mäki reassuringly tells me will prevent an out-of-control Tiguan punching a hole in the facility wall.

The track is quite narrow at nine metres, but there’s plenty of space to enter and exit on a wide line. Mäki demonstrates his lifelong mastery of snow driving, first gained in his teens, by braking early and firmly, counteracting front-end plough by working the rear axle in the opposite direction as we enter the corner. He’s effortlessly precise and makes the Tiguan dance around Indoor 2.

Speeds are kept low by the tight corners and the lack of run-off, but Mäki stresses that tyre testing and vehicle evaluation are about consistent and repeatable driving to build up banks of data comparable across, for example, different stability control settings and tyres. Lap times are recorded as the key metric, but seat-of-the pants, test driver evaluation plays an equal role in chassis and tyre set-up.

Needless to say my efforts are more clumsy, and I make the classic beginner’s error of braking too late and understeering wide.

I also find the lighting inside the test track quite distracting and, with no outside visual reference point, rapid circuits are slightly disorienting. Mäki agrees and says that even the pros do most testing with the lights off to eliminate the strobing effect.

But with some guidance from Mäki, I improve. I’m also reminded of snow driving last year on fresh powder in Canada, notable given how the snow in Test World is months old.

And that’s the unique feature at Test World – fresh outdoor snow on tracks with precisely controlled temperature, grip and humidity for winter testing in summer. Now that’s a novelty. 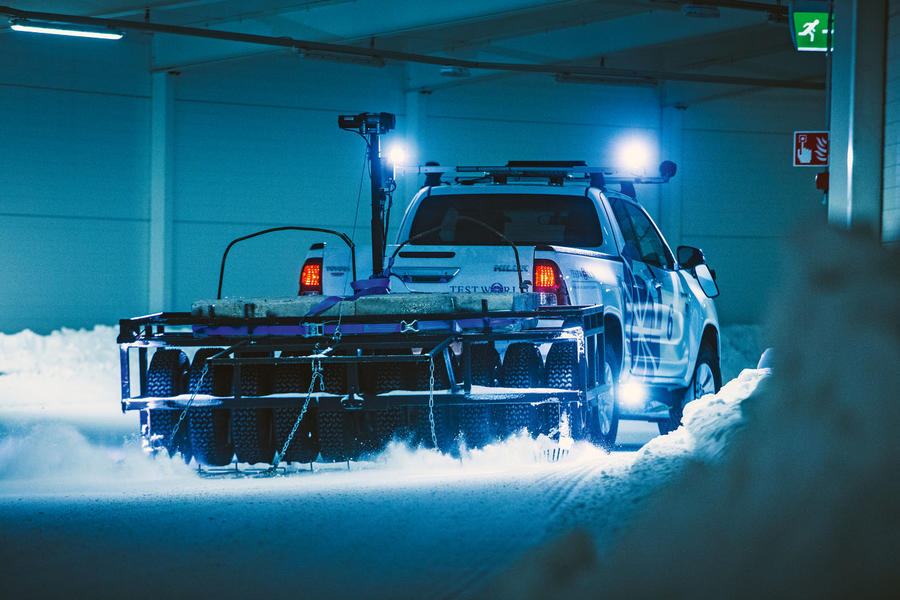 They’ve got the snow-how

In essence, Test World is a cold store – like those used to keep food fresh – built on top of an ice rink. But there is a lot more ‘snowhow’ in the detail of how indoor snow, curated to mimic outdoor conditions, is kept in tip-top condition for eight months of the year.

Not only is the air above ground cooled, but two sets of underground pipes with layers of insulation ensure precise control of test track temperature.

The deepest pipes actually warm the ground, using waste heat from the refrigeration process, to stop the permafrost under the test halls from dictating track conditions.

A central refrigeration plant – out of bounds to Autocar because its plumbing is top secret – has a power rating of 1.5MW, enough to cool four ice rinks. Ethylene glycol coolant flows through 50 miles of underground pipes, cooled by heat exchangers in the central plant. The heating circuit flows through 28 miles of pipework.

“What we really have here are not just cold rooms – almost anyone could create those – but the expertise to groom and manage the snow to keep its condition perfect,” says indoor manager Timo Tuovinen.

Snow is moved into the halls during April, spread by a PistenBully snow groomer, like those used at ski resorts. It levels snow to a thickness of 22cm. By the end of the season, the base will have depleted to 10cm.

Test World doesn’t make its own snow, because the end result is not like that which cars will experience in use. “And there’s not enough air inside for the snow cannons to work properly,” says Tuovinen.

The real expertise in the snowhow is the experience and craft required to carefully compact the snow to mimic outdoor conditions, while controlling the humidity is the secret to maintaining fresh and consistent snow over eight months of use.

During the season, the snow is regularly groomed by a fleet of machines, like the pick-up truck and its weighted trailer used on our visit, but on site are also a pair of Zamboni machines, better known for polishing ice-hockey rinks.

Winter tyres: should I buy them?