How to enjoy high-speed thrills in a Dacia Sandero

How to enjoy high-speed thrills in a Dacia Sandero

Fun in slow motion: Can this sub-1.0-litre Sandero deliver the same thrills as a McLaren?

Can you really have fun driving slowly? As the prospect of speed limiters looms, we find out with a 0.9-litre budget hatch

Coming over the crest, I saw the road gyrating gratuitously into the distance. At this time in the morning, there’d be no traffic. Even the sheep were too bleary-eyed to pay attention to the blue car that had just appeared on their horizon.

Third should do it, I thought with a smile, pushing the lever forward, instinctively nudging the throttle as I did. There was no doubting that cry of approval from under the sloping bonnet. Down went the pedal again, but this time it stayed there, splitting carpet fibres as surely as the car’s nose was renting asunder any air reckless enough to resist our progress. 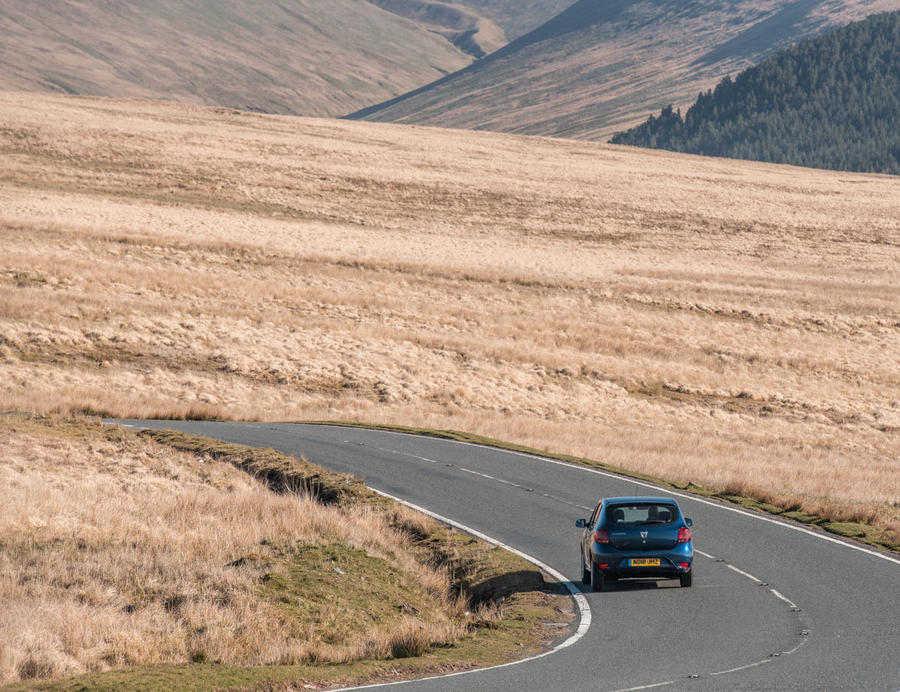 The corner at the far end was long and fast, arcing away uphill and to the right. But it had a secret, and a nasty one at that. At the turn-in point, the road rose imperceptibly to the naked eye, but enough to unsettle the suspension at the very instant you needed it most. This was a foe I knew of old, but that hardly helped. Time was running out and I knew it. The bend looked like it should be taken flat, but how many others had thought as much and found to the contrary and their cost?

But something had passed between this man and that machine in all those miles together, something that was unsaid but could not be mistaken. It was telling me it would be all right: it had my back. We would survive this thing together. So my mind stayed strong and my foot stayed down. Flat out it would be.

And flat out it was. I guided the nose in, and instantly felt it go light. I saw my hands add another few degrees of lock in response. I thought hard about lifting, but, no, it was already too late for that. We were committed. But I could see the trajectory we were describing and, in that wondrous moment, I knew we would prevail. The car exited the curve with a few inches to spare. As I changed joyously up to fourth and rammed the pedal home once more, I looked down in time to see the early morning sun glinting off the speedometer needle. The Dacia Sandero was doing 53mph. 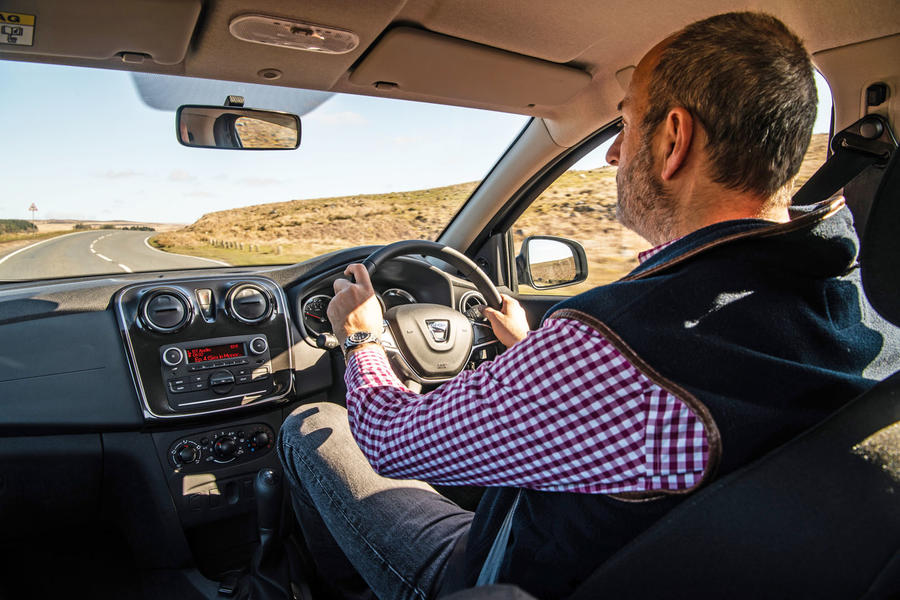 Okay, so I’ve spent the first few paragraphs of this story offering by way of gentle spoof my fond homage to the way that supercar drive stories used to be written by the people who first sparked my interest in cars many decades ago. And while it was fun to do, I did it for a reason, and exactly the same reason that I really did get up early and drive a 0.9-litre Dacia Sandero across one of the most challenging roads Wales has to offer. If you took not some low-slung slice of unaffordable automotive exotica but, instead, Britain’s cheapest new car, could you still have fun? How much of the enjoyment was down purely to the sense of freedom and simple joy of being on a world-class road whatever you’re in? I didn’t have a clue.

There was a time when the answer would have been far clearer. Back when our Mr Cropley was plying his trade on another title, he took a group of four of Britain’s cheapest cars and did a not dissimilar thing. And although I’ve not seen the story in at least 30 years, I do recall some reference to drawing lots to see who would have the misfortune of driving the Reliant Robin over the Severn Bridge in a stiff side wind. 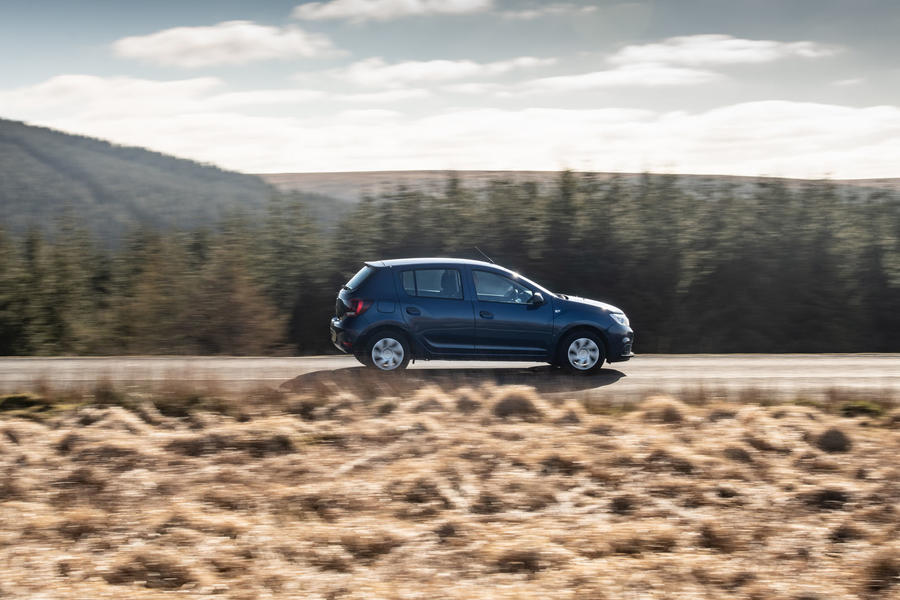 We have come so far. True, the Sandero supplied was not the absolute poverty-spec model but it still costs just £8800 in this midrange TCe Essential trim, despite having Bluetooth, a DAB radio, electric windows, remote central locking, twin USB ports and air-con. Sufficiently quiet and comfortable, with a rather eager little motor and enough interior space, it’d make a very poor butt for any cheap-car-related jokes. Because it’s entirely adequate for any routine task and, for the money, something closer to brilliant.

But could you actually contrive a set of circumstances in which it could be genuinely good fun to drive? That was a different question.

At first, I thought not. On more normal roads, it just seemed too slow and soft. That little three-pot motor was willing enough but saddled with unfortunately tall gearing. The gearchange was sufficiently accurate but lacking any mechanical feel: you’d never swap a cog just for the hell of it. Overtaking was difficult, and if you got baulked, recovering that lost speed took time. 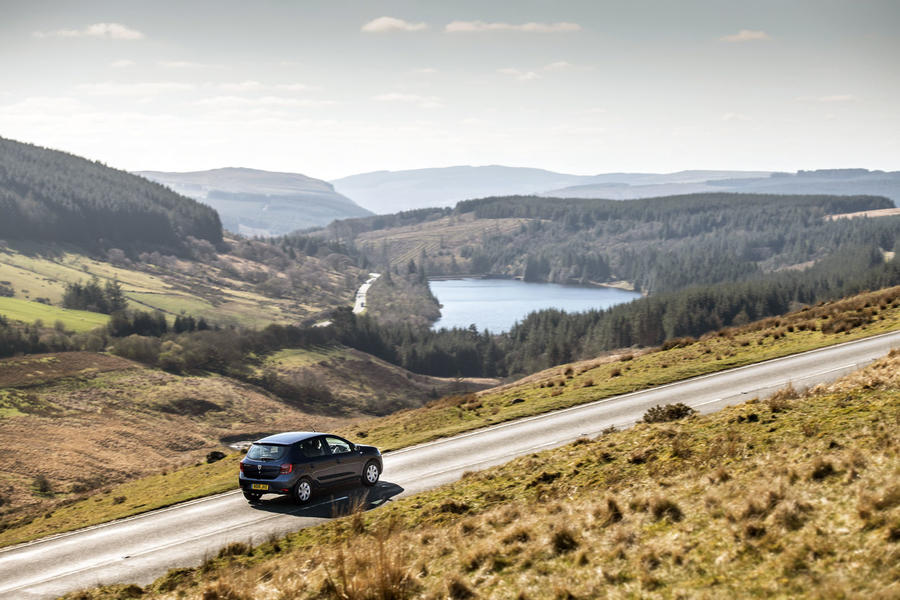 But in exactly the same way that it takes time to adjust to an implausibly rapid car like a McLaren 720S, so do you also need to acclimatise to a car at the other end of the performance scale. And because human beings are almost infinitely adaptable, what had seemed somewhat lethargic and slow-witted became, well, less so after a while. Remove the traffic headache from the picture and it brightened further. Add in a really great road and you might just be surprised how much fun can be had. I was.

Because the sensations that lie at the root of driving pleasure remain. They may not be as accentuated as in a McLaren or even a Mazda MX-5, but that is not to say they’re absent. You can still feel the forces on your body. You can still take an optimal line through a corner. So long as the car is not unpleasant or actively incompetent – and the Sandero is neither – there is still pleasure to be had in guiding it along the length of a road, and seeing how accurately and completely what is still a tonne of metal can be bent to your will. How neatly can you hit that apex? How smoothly can you change gear? How can you best extract the maximum level of performance for the minimum of perceived effort? And for those who like to feel a car on The thing that comes closest to spoiling the Sandero is neither its engine nor chassis, but gearing designed for emissions testing, not road driving. the limit, it’s easily done in a Sandero in such an environment and almost impossible in a supercar. 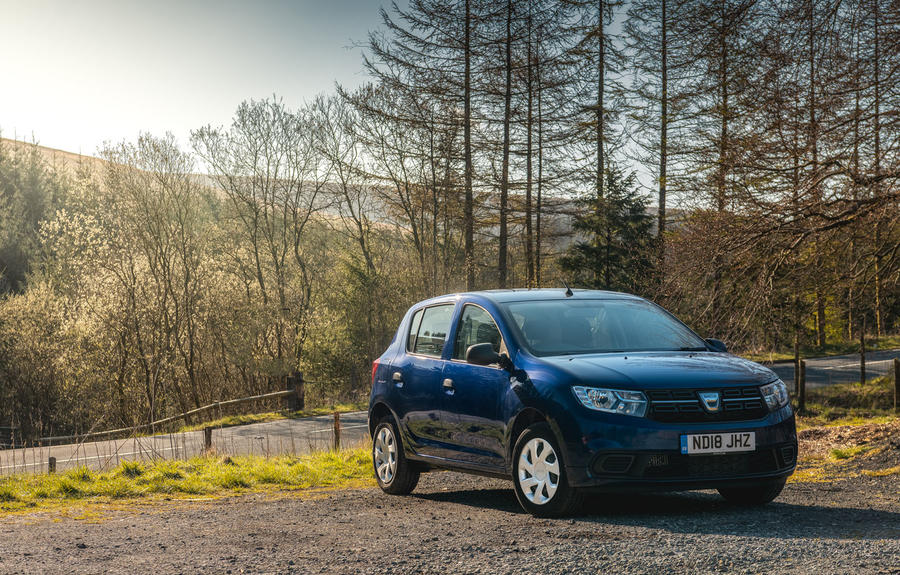 Two more things: the more you drive a car as slow as the Sandero, the emptier the roads appear. You’re always in traffic in a supercar because the time taken to cover the gap between you and the next car is so short. In the Sandero, it can take an age, an age in which you have the road to yourself. And, of course, driving a supercar is these days an exercise in saintly self-restraint, with you rarely if ever savouring more than a small proportion of the car’s potential. By contrast, you can use pretty much all the Sandero has to offer pretty much all of the time.

Do not be alarmed: I have not suffered some appalling epiphany. I love fast cars now as much as ever. The only point I seek to make is that if your car is not fast, so long as it is not also unpleasant, there’s still plenty of genuine enjoyment to be had from driving it on a decent road. Enough to make you want to set an alarm and make a special journey in your Sandero? Probably not. Or maybe just not yet.

For if the threats are followed through and we do end up in a world where your car shops you to the authorities the moment you inadvertently place one toe on the wrong side of the speed limit, then cars you can enjoy entirely within the confines of the law will suddenly start to make a great deal more sense. Even now, there’s more fun to be had in them than I, for one, had thought.

The most fun slow cars 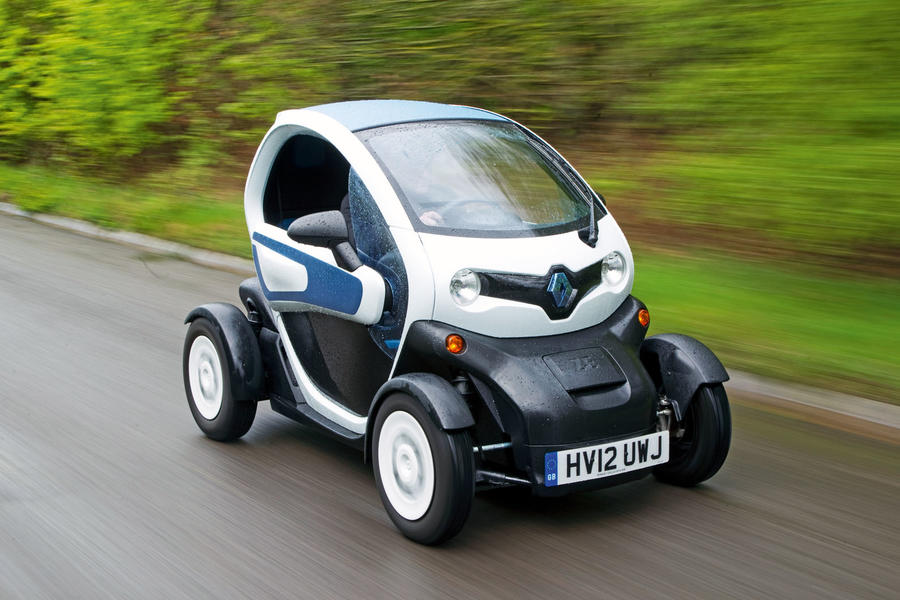 Okay, so the Twizy is not so much fun on a dual carriageway in the rain, but it is just about the only four-wheel device that’s actively fun to drive in town. You’ll scarcely believe the gaps it will get through and the handling is a bona fide hoot. 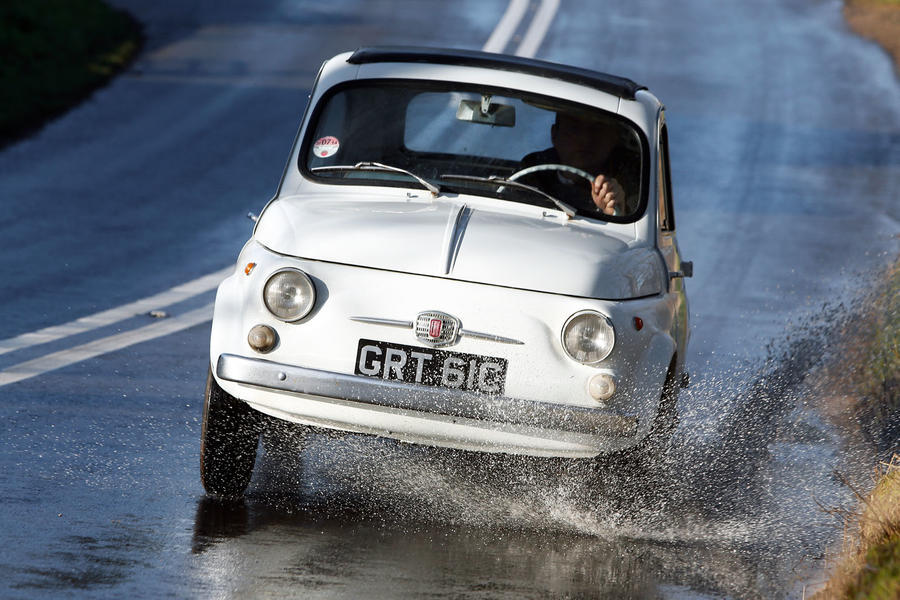 When a car is this small and light, it doesn’t need a lot of power. Rear engine, rear-wheel drive and a tiny wheelbase bring exactly the same attributes to this diminutive Fiat as they did to an early Porsche 911. 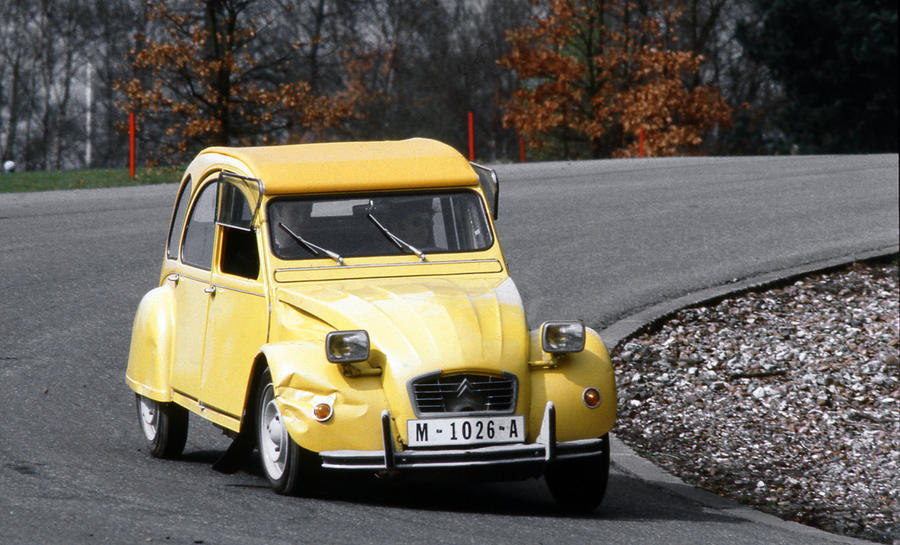 A flat-formation engine and fully independent, front-to-rear interactive suspension from which McLaren learned a thing or two. Yes, 2CVs roll like dinghies in a typhoon, but their snake-low centre of gravity means they cling on superbly. 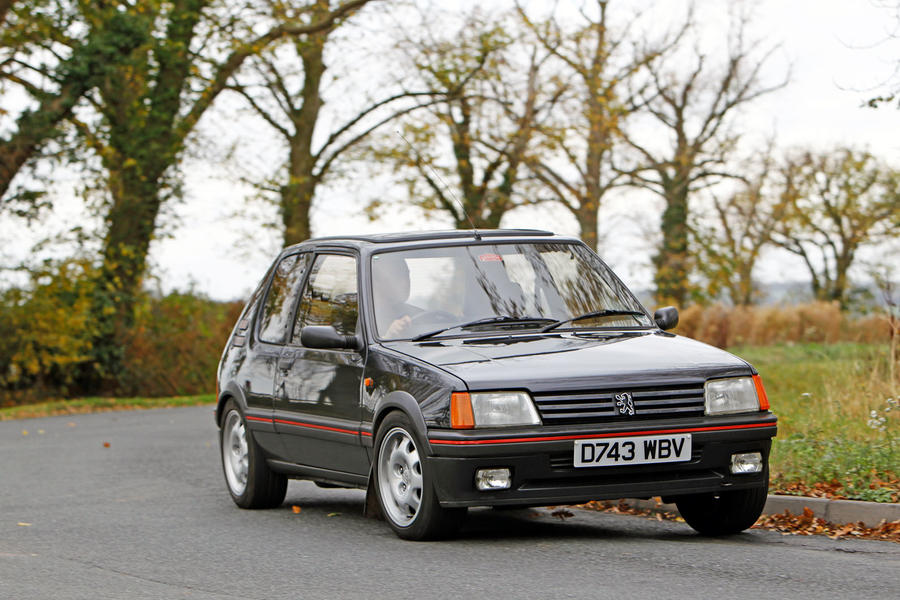 You might think the only 205 worth driving is one with a GTI after its name. Not so. GTIs are such fun in the first place because they are so light, but the lesser models are lighter still. A 205XS, for instance, is an under-rated gem. 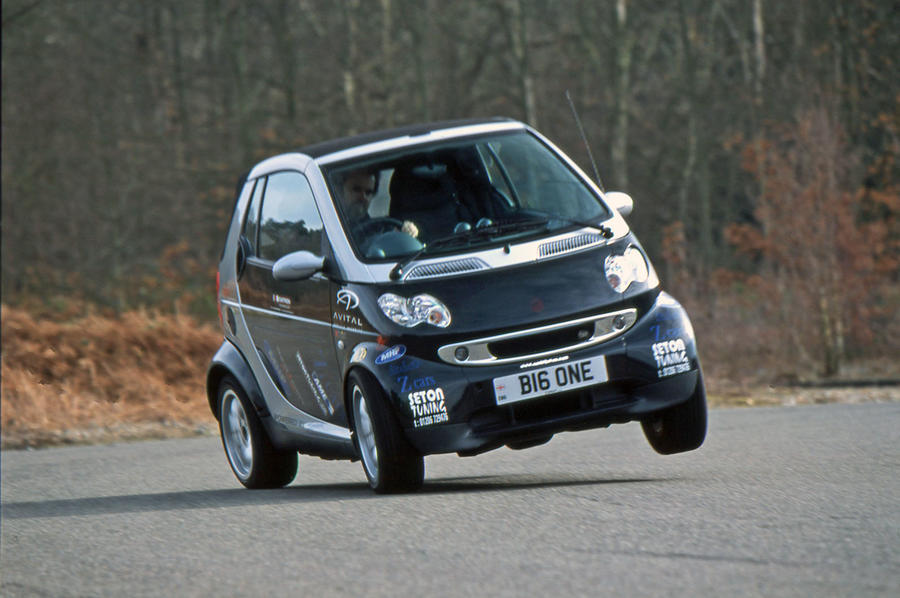 A new one. You’d be surprised, but it’s fun for all the reasons the old Fiat 500 is fun, just at a rather higher level of competence. Drove one across Wales a couple of years ago and still look back on it as one of the great drives.

Matt Prior: why drive a supercar on the road?​