Classic car owners in need of rare parts can get them quicker than ever thanks to 3D printing. We find out more

Need a clutch release lever for your Vauxhall Corsa? Not a problem. There are hundreds of suppliers ready to service your enquiry and it should be with you tomorrow. Cost: about £16.

But what if you need one for your Porsche 959, an extremely rare car, parts for which you’re unlikely to get online, never mind over the counter? Until a year or so ago you would have had to get one specially made at great expense but, since 2018, Porsche has been able to produce the part on demand and at reasonable cost using 3D printing and, specifically, a process called selective laser melting.

This involves spreading a shallow layer of steel filings in a sealed container. Guided by CAD data derived from scanning an existing example of the part, a laser melts the material in the desired locations before another layer is applied and the process repeated until the component is produced. Another technique, more suited to plastic components, is selective laser sintering, where the material is heated almost to melting point as a laser fuses the plastic powder at predetermined points.

Porsche uses these processes – called additive manufacturing because they involve adding layers of material – to produce around 30 parts for its older models, for which creating tooling and producing them in the conventional way would be prohibitively expensive. 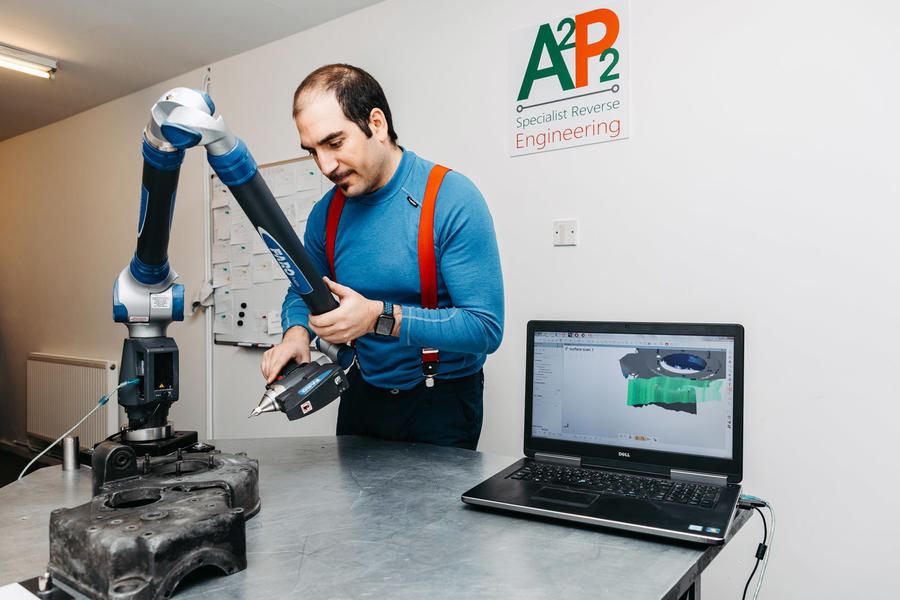 Porsche isn’t alone. Across the motor industry, companies large and small are using the same techniques to produce everything from prototypes or pattern parts for moulds to one-off, functioning components. They fall under the grand name of reverse engineering because they involve deconstructing a finished component to determine how to remanufacture it.

One company doing this work is A2P2, based in Nottingham. It’s at the back of a busy workshop that’s home to INRacing, a company specialising in the restoration, maintenance and sale of historic road and race cars and founded by a chap called Ian Nuthall.

When I visit, the workshop is filled with rare motors, including a 1959 Tec-Mec Maserati, a 1959 Lotus 15 once raced by Graham Hill, a couple of 1952 Cooper Bristols and a 1965 Autodelta Alfa Romeo GTA. A2P2 has had a hand in helping to keep them active, as I discover when I meet its founder, Alistair Pugh.

In contrast to INR’s workshop with its ramps, lathes and even a huge five-axis CNC milling machine, Pugh’s place is a high-tech oasis of calm. In one corner is a 3D printer, methodically layering up, in plastic, a bevel box for a pre-war, chain-driven Frazer Nash. Once completed, it will form the pattern for a sand cast moulding in metal. As it quietly goes about its business, Pugh draws my attention to the room’s other occupant: a 3D laser scanner. Looking like an angle-poise lamp but with a probe at the end rather than a bulb, it’s fixed to a sturdy metal table and connected to a laptop.

Pugh’s colleague, Alberto, shows how, by painstakingly moving the probe around a component – in this case, the diff casing from a 1952 Alta GP car – he can capture and digitise its every dimension, including the internal faces of the screw bores. The result is an accurate digital representation that can be converted into a CAD file for a 3D printer or into an engineering drawing for a machine shop to follow. 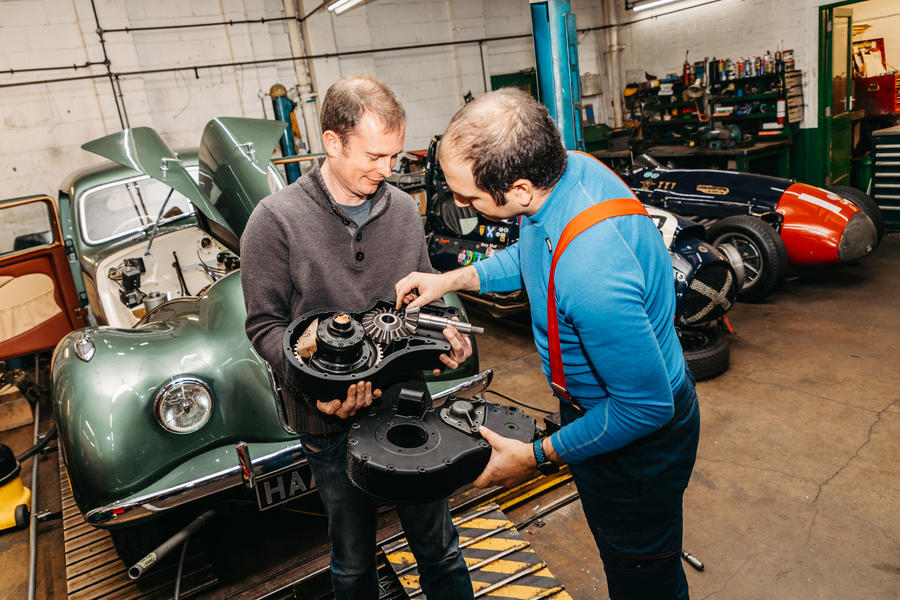 “‘From gaskets to gearboxes: scan it, draw it, make it’, we like to say,” explains Pugh. “Laser scanning and 3D printing have so many uses, from enabling classic car owners to have a digitised record of their car from which body panels, for example, can be recreated after a crash, to producing replica parts in plastic as a pattern for a sand cast or simply to test fit and function.”

On that point, he takes the other half of the Alta’s diff casing, produced earlier in plastic by the 3D printer, and inside it places the original crown wheel and pinion, and limited-slip differential so I can see how they fit snugly into their respective places.

But should it all look like just moving a probe and clicking a mouse, Pugh is quick to point out that interpreting the data and knowing what is possible from a manufacturing perspective are crucial. The former graduate engineer speaks from experience, having started out spannering for Nuthall before moving into contract work with Ford, Aston Martin and Jaguar. In fact, it was Nuthall who lent Pugh the £125,000 necessary to buy his first scanner.

He’s now on his fourth and, using it in conjunction with his 3D printer, Pugh has produced a huge variety of components, including a modified and strengthened sump with anti-surge baffles for a Renault 5 Turbo, a bell housing and diff casing for a Volvo 242 GT and even door handles for an E30-era BMW M3. However, one of his proudest achievements is producing a digitised version of a very rare pre-war coupé – with only a saloon version and photographs to go on.

He says: “With no existing model available, we had to scan the saloon’s chassis, steering wheel, back axle and engine to establish the coupé’s hard points and the locations of its major mechanicals. Then we placed a scale archive image of the coupé behind the resulting CAD drawing as a guide to the body’s angles and curves. This part was all done by eye. Having established the body’s shape, we created a one-eighth-scale buck in the 3D printer. This we used to give us the dimensions for the car’s ash body frame.”

And here before me in the workshop is that partly assembled frame in actual size, looking for all the world like a particularly complicated piece of self-assembly furniture. It’s an inspiring story of how a long-lost car has been brought back to life by modern technology. But as I make my way out of Pugh’s high-tech workspace and past the assorted historic road and race cars in INR’s workshop, it’s obvious that it’s not the only example of modern technology coming to the rescue of old and not so old motors. 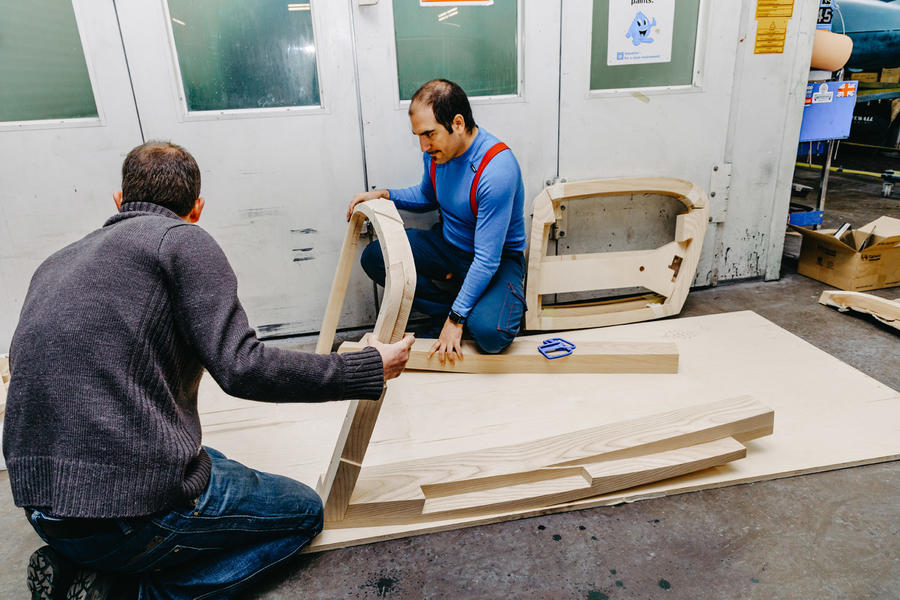 Help for more modern classics, too

Stuck for that gearlever bellows for your E30-gen BMW? Exhausted eBay in your search for a sun visor fixing for your 1985 Audi Coupé? Combed the planet for engine cover clips for your Renault Clio Williams?

You need GRYP. The Bordeaux-based firm, founded by three young engineers only a couple of years ago, specialises in the 3D printing of obscure or simply impossible-to-find parts for old and, crucially, modern-day classic cars. The parts it prints include fasteners, covers, logos, bumper corners and engine cable passes. It can print more complex parts, too, such as the mechanism for the cabin ventilation system in an Aston Martin V8 Vantage.

“We have done parts for cars from 1929 to 2000 but we do more for the younger ones because those cars were made using more plastic,” says Bastien Vanlathem, a co-founder. “For older cars, we can create parts in composite materials, including carbonfibre, that are more resistant than aluminium.

“We need an original part, complete or broken, to scan. At the same time, we may correct weaknesses in the design and perhaps print it in a tougher material. Our goal is that all collectors can find the parts they need for their special car.” Visit gryp-3d.com to learn more.

Blast in the past: How to rent a classic car