Slimmer headlights, a wider grille and a new bonnet feature

Fresh-faced sports car will arrive early next year with 296bhp four-cylinder and choice of two V8s, but no six-pot

Jaguar has overhauled the F-Type sports car with new styling and technology to take on the latest Porsche 911.

The targets were to give it a “more assertive” look, to improve key elements like the infotainment system and to lift materials quality to the level of more recently launched models, such as the I-Pace.

One major surprise is the disappearance of the F-Type V6. From 2020, the Jag sports car will come with a choice of either two 5.0-litre supercharged V8 power levels (retaining the 567bhp at 6500rpm version, and a new unit with 444bhp at 6000rpm) or the continuing entry-level 2.0-litre turbocharged Ingenium four-cylinder engine producing 296bhp at 5500rpm. 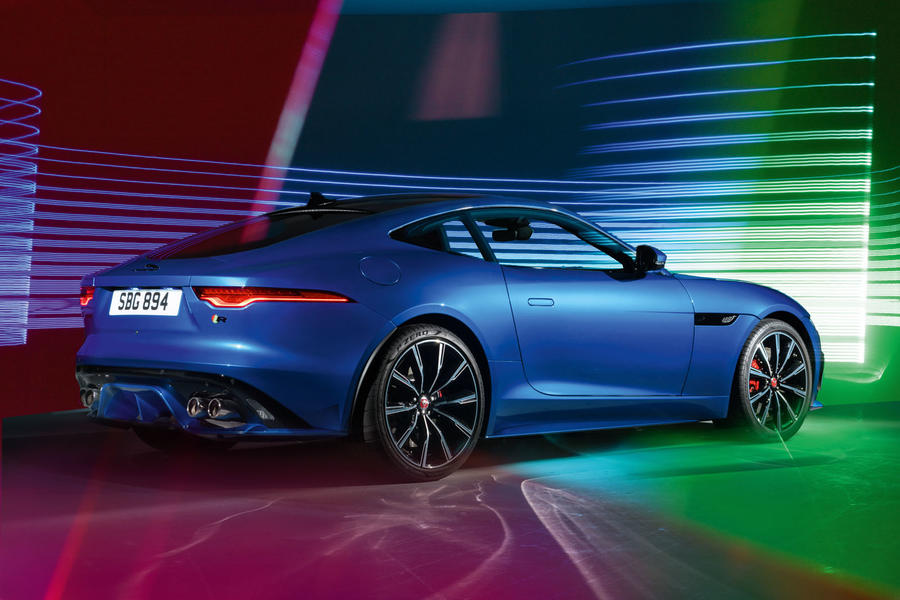 In a reorganisation at the top of the F-Type’s three-tier range, the 567bhp performance versions of the coupé and convertible are available with only all-wheel drive and the plushest, sportiest R specification – which also gets a complete rethink of spring and damper settings. This flagship can cover 0-60mph in just 3.5sec and has a top speed of 186mph.

The 444bhp V8 buyer gets to choose between rear-wheel and four-wheel drive systems, while the 2.0-litre customer is offered rear drive only.

One major advantage of the smallest-engined model is its 120kg-lower kerb weight (it weighs 1520kg against 1640kg for the rear-drive V8), which lightens the nose and improves steering response. The heaviest F-Type is the full-house R convertible equipped with four-wheel drive, weighing 1760kg. 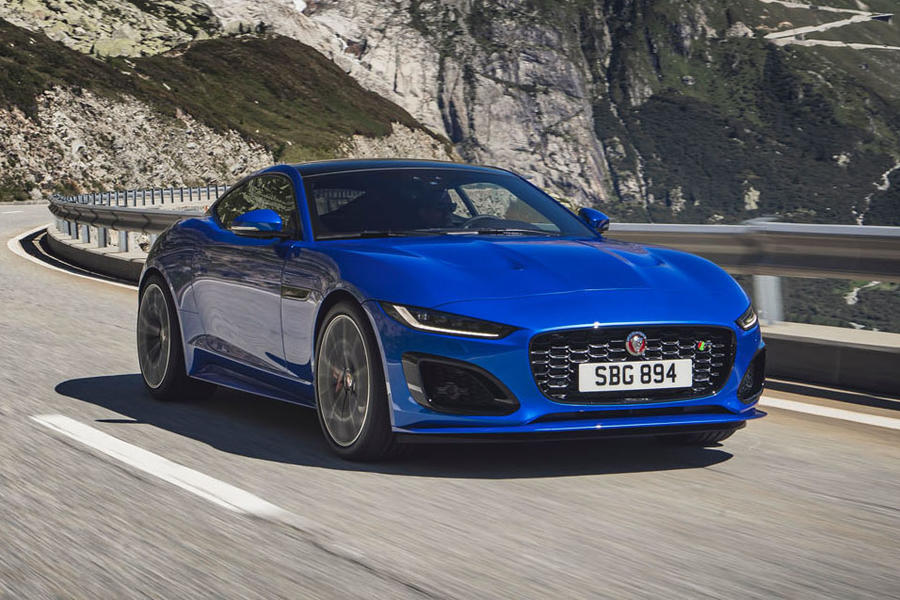 For the first year, the F-Type will be offered in First Edition guise with either 444bhp or 296bhp engines. They will be based on R-Dynamic equipment levels but with a collection of special colours, unique trim details and First Edition branding.

All F-Types have active exhausts and the V8s have a special ‘quiet mode’ to help prevent neighbourhood disturbances when owners leave home early or arrive late.

Jaguar design director Julian Thomson, who was heavily involved in the 2011 concept that introduced the first production F-Type, said the original mission was to “design the most beautiful sports car, with purity, proportion and presence that’s unmistakably Jaguar”. He described the latest model as “more dramatic than ever, with even greater clarity of purpose”.

The most important exterior changes are ahead of the windscreen, with the aim of giving the body a greater apparent length (it’s no longer) and giving the car an even wider, more planted stance (it’s no wider). A new clamshell bonnet keeps its central bulge but now has a softer, “liquid metal” appearance. Each of the three models now gets a unique lower bumper shape – clean and sculptural for the entry model, bolder with aero blades for the R-Dynamic and with black bezels for the large and sporty-looking lower air scoops on R models. 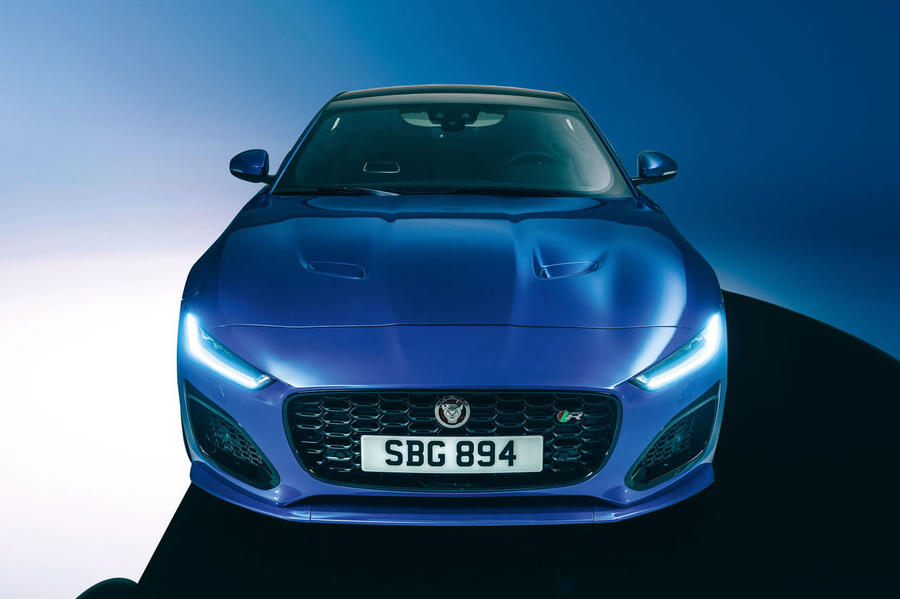 That new treatment allows the introduction of slimmer LED headlights framed by ribbon-like daytime-running lights for which Jaguar claims a “calligraphy” effect. The running lights are slim along their horizontal element but widen as they sweep upward and outward.

There are also various subtle changes to badges and textures on trim parts, which, like the rest of the new F-Type’s changes, add neat touches of modernity.

The new headlights leave room for a wider and deeper grille, still very much in the F-Type Jaguar idiom. “Everyone’s shouting louder these days,” said exterior design boss Adam Hatton, “and we need to do the same. We don’t want to be brash, but we don’t want to shrink from the opposition, either.”

The haunchy rear shape remains intact, partly because of the F-Type’s mission to be a timeless design and partly because Jaguar’s design team (along with buyers) continue to like the original shape.

The tail-lights have adopted a slimmer, ‘chicane’ design introduced on the I-Pace and there are adjustments to the numberplate recess and the diffuser shapes. 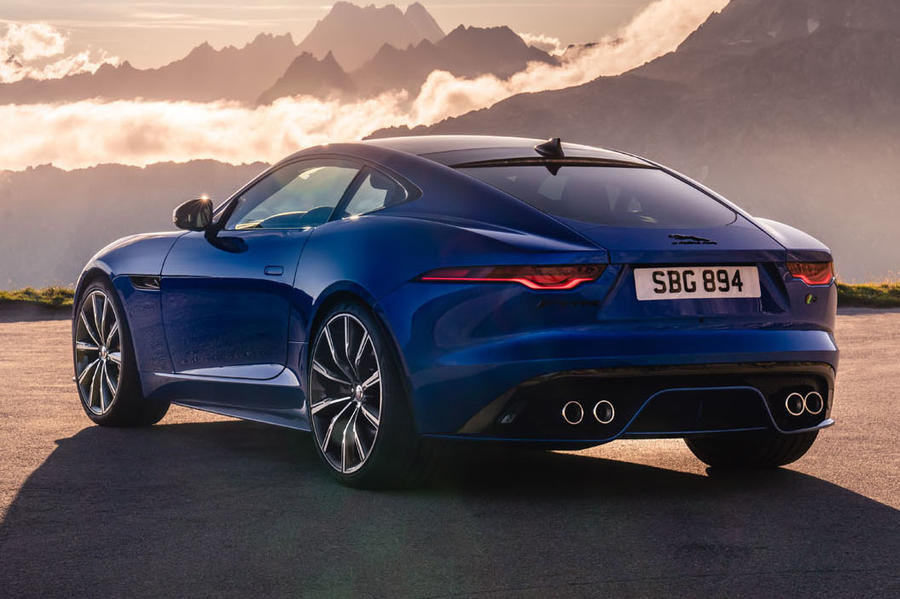 The three F-Type models continue with powertrain-specific exhaust tailpipes. The 296bhp version retains a handsome central quadrilateral-shaped outlet and the V8s have quad systems that differ slightly in detail.

Inside, the F-Type catches up with other Jaguar models, notably with materials of more obvious quality, and adds some unique details. There’s now a 12.3in driver display, with unique F-Type graphics, that can be configured as a large central tachometer.

Jaguar Land Rover’s familiar 10.0in Touch Pro system is in the centre fascia, now with refinements like Apple CarPlay compatibility, but the 2020 model retains the three rotary heating and ventilation controllers Jaguar regards as essential to a good driving machine. 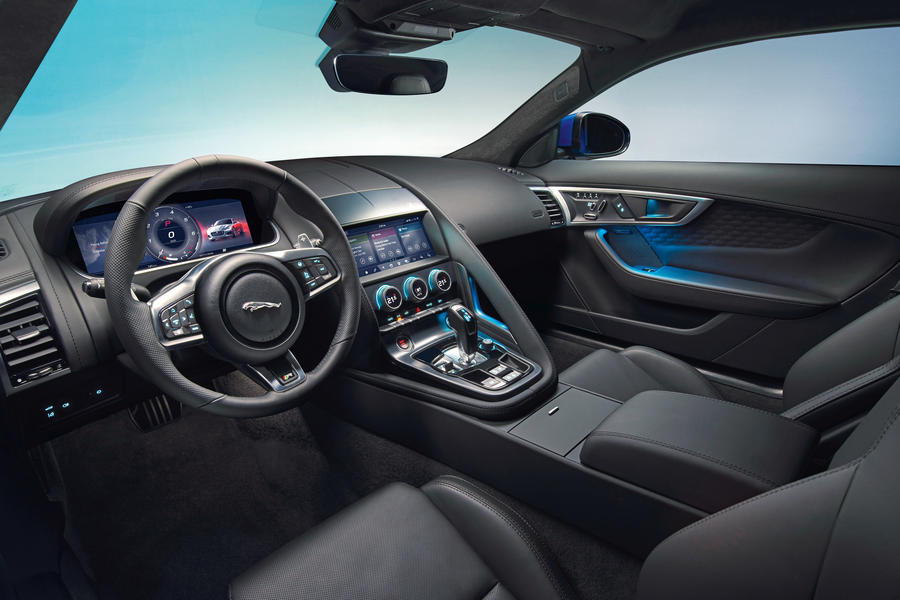 The 2020 F-Type also incorporates new, subtle details the designers believe owners will enjoy: there is now ‘Jaguar est 1935’ lettering on the seatbelt guides, repeated on the glovebox release surround, to mark the year in which the company’s founder, Sir William Lyons, first used the Jaguar name on his cars.

Two seat designs, Sport and Performance, are offered, both described as “lightweight and slimline”. The base and R-Dynamic models come with Sport seats as standard, while the Performance seating – with more pronounced support around shoulder height – is standard on R and First Edition. 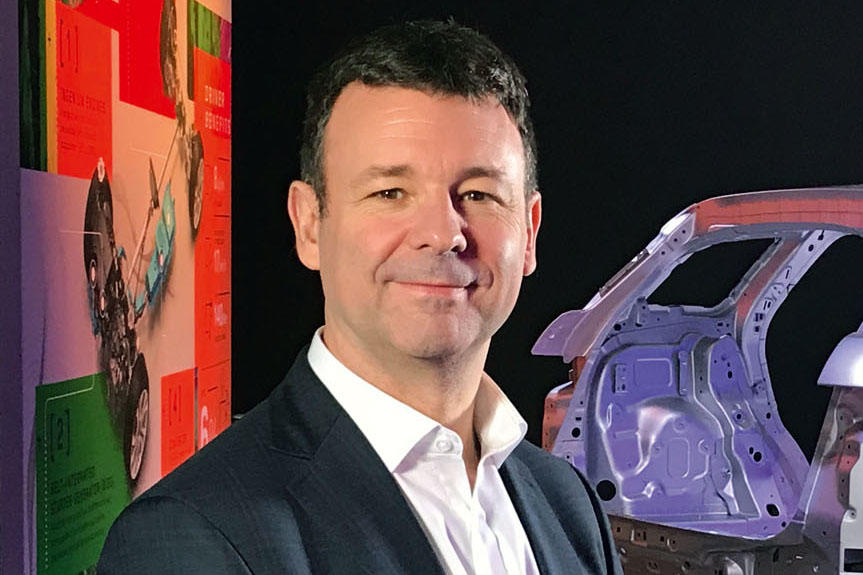 Why have you dropped the V6 F-Type?

“The decision not to offer the V6 in the UK and Europe follows a sales review showing demand is by far the heaviest for the four-cylinder engine. Also, we believe the introduction of a new 444bhp V8 in both AWD and RWD forms still offers customers a strong range.”

Why didn’t you use the new Ingenium straight six?

“It’s a simple question of packaging. With demand for the four-cylinder so strong, we simply couldn’t justify the significant investment needed.”

How are F-Type sales doing?

“Last year, we sold around 7900 cars, mostly in the UK, US and Germany. Our record of 12,000 sales was set in 2015. The most popular F-Type derivative is the four-cylinder R-Dynamic, which is why we’re offering a First Edition based on this model as well as on the new 444bhp V8.”

Has the F-Type production process at the Castle Bromwich factory changed much in six years?

“The core processes at Castle Bromwich are largely unchanged but we’ve recently updated our rolling road, calibration and paint validation facilities, with special emphasis on quality. We’re very pleased with the results.”

“At heart, we’re a sports car company. The market has diversified over the years and we’ve had to do the same, but I think we’re stronger for it. For me, Jaguar just wouldn’t be Jaguar without a sports car in the line-up.”

Two new compact Jaguar SUVs on the cards, tipped to use BMW platform

The future of Jaguar Land Rover, according to CEO Ralf Speth